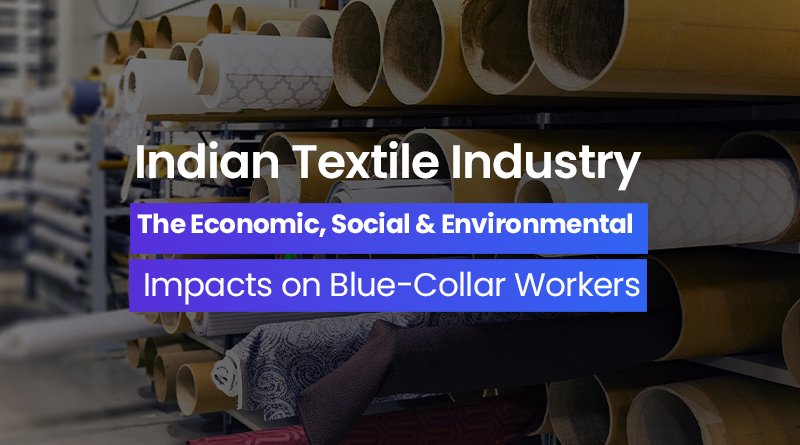 India is the second largest producer and consumer of textile in the world. The Indian textile industry has a significant bearing on the economy and employment in India.

Textiles and clothing manufacturing is one of the most important industries in India and has a huge bearing on the Indian economy.

The textile industry in India has taken off in recent years because it is labor intensive, provides plenty of job opportunities, needs little capital to start up an enterprise, and offers steady incomes. The country’s companies rank among some of the best manufacturers in Asia because they can produce at much lower cost than their counterparts.

The textile industry in India has a long history. It has a wide variety of fabric manufacturing, including silk, wool, cotton and synthetic fabrics. India is the second largest textile producer in the world and its textile industry accounts for 18% of the country’s exports.

The Indian Textile Industry has been bearing on the economy for many years, especially since it employs about 25 million people who sustain their livelihood from this sector.

In recent years, India’s textile industry is emerging as one of the major players in global trade with exports worth more than US$49 billion annually, making it second only to China among developing countries.

What is the Indian textile industry all about?

India is the world’s largest producer and exporter of textile and garments. It has evolved into a global hub for garment trade, but it had faced many challenges. In the past, the textile industry has been affected by declining demand from developed countries, rising labor costs, absence of skilled workforce and high raw material prices. At present, the main threats to the Indian textile industry are lack of skilled labor force and domestic competition from China.

The textile industry has an annual turnover of $480 billion, which is below that of China’s $584 billion.

The blue-collar industry in India is not well developed, but its high population makes it attractive for companies looking to cut costs by employing cheap labor. The country has a workforce numbering more than 500 million people with about 150 million working in the textile sector alone.

READ: – The Effect of AI on Indian Blue Collar Workers

How has the Indian textile sector changed through time?

The Indian textile sector is one of the most important contributors to India’s exports. The Indian textile industry has also undergone significant changes over the last few decades. It has evolved from being a primarily agriculture-based economy to the world’s fastest-growing economy with a global influence in various industries.

India is one of the leading producers of cotton in the world. The country contributes to about 25% of the global cotton production. India also has a textile industry that employs millions of people and generates huge revenue.

Indian textile sector underwent many changes over the years. As the Indian economy improved, more people are entering this sector for jobs, mainly due to their affordable costs. With modernization of this sector, new technologies are being implemented into it that help in improving productivity and efficiency. The textile industry in India has undergone major changes over time, owing to factors like technological advancement and globalization. These factors have led to increased competitiveness in the global market, which in turn has led to a change in the structure of the Indian textile industry.

Over time, agricultural production has reduced and become more specialized, while manufacturing has increased. This shift is largely due to the increased modernization of industries, which has led to more productivity, efficiency and lower production costs.

READ:- The Growing Industry of Indian Blue Collar Workers in the Indian manufacturing industry in 2021

What are the challenges that Indian textile sector faces today?

The Indian textile industry is one of the fastest growing sectors in India with a production capacity of more than US$105 billion. This sector has witnessed many changes since the time it was established.

As per reports, this sector has seen a decline in its production due to the decreased demand for Indian textile goods in international markets.

However, with 40% of India’s population living below poverty line, the need for employment especially low-paying jobs like weaving looms large over these people who are mainly from rural areas. These are some of the root causes behind this industry’s changing scenario.

The Indian textile sector has undergone many changes over the years. The first major shift happened during the industrialization of India, when textile mills emerged. These mills had a greater need for labour, which led to an increase in the number of people looking for work. This increased demand led to an increase in wages.

This shift also led to the rise of educated youngsters who were interested in working at these textile mills, as they could earn more than they would at their previous occupations. As education levels rose, more and more people were able to work in these mills and the number of unemployed people decreased.

The Indian textile industry has a large impact on the livelihoods of blue-collar workers. India is the world’s second-largest producer and exporter of textiles. India is also one of the top cotton clothing manufacturers in the world, with over 56% of its exports being cotton clothing.

The Indian textiles industry was one of the largest in the world, with a turnover of $100 billion in 2016-17. The textile industry was once a major employer with about 12 million workers in the 1980s. It created jobs for skilled workers and wage earners. However, due to increased competition from other countries, falling demand for traditional textiles, and automation in the textile sector, this number has dipped down significantly.

Due to globalization and increasing competition, there has been a rise in automation in textile mills across India with many companies choosing to employ machines instead of humans for weaving, knitting, or stitching. Alongside this change in technology there has been a shift in global demand towards cheaper goods which has led to a decrease in the need for skilled labor and an increase in low-skill jobs.

This fall has led to an increase in unemployment rates among skilled blue-collar factory workers and their livelihoods are at risk because they cannot find alternate work due to lack of skills or age restrictions.

READ:- Nurses and their contribution in the Covid 19 Pandemic

What is the Indian textile policy and how does it affect its blue-collar workforce?

The Indian textile policy is a government initiative to protect the country’s textile industry from cheap Chinese imports. This has been a huge blow to the country’s blue-collar workforce.

The Indian Textile Policy was a government initiative aimed at protecting the textile industry in India from cheap Chinese imports that were flooding markets in China and other neighbouring countries. However, this resulted in many industries shutting down due to lack of cheap labour and also caused job losses for many blue-collar workers who were employed in these industries.

The Indian textile industry is a major part of the current Indian economy. It employs a large number of blue-collar workers who do not have any formal training in the textile industry. The Indian textile policy was introduced as an attempt to modernize and strengthen the industry by boosting exports, removing import restrictions, and building infrastructure. However, it has been criticized as hurting rather than helping the blue-collar workforce by making it difficult for them to find jobs in other sectors because they don’t have any skills that are relevant to new technologies.

Conclusion: The Future for Indian Blue-Collar Workers in the textile industry & What Needs To Happen To Support Them

The future for these blue-collar workers in this industry looks grim as automation increases, which will reduce the demand for their skillsets.

The textile industry was traditionally known for its blue-collar workers. They were the backbone of the Indian economy. However, with the advent of new technologies and automation, the need for people to work in this sector has declined drastically. The lack of jobs in this sector is taking a toll on these workers and their families.

To support these workers, the government needs to focus on creating an environment where skilled jobseekers find it easy to find jobs and become employable again.

The government needs to take steps to create jobs in other sectors or support these blue-collar workers so that they can find other suitable employment opportunities while also providing them with social security benefits that are needed by all citizens across India.
Thank you for reading. Visit us at Teamlease for more updates.