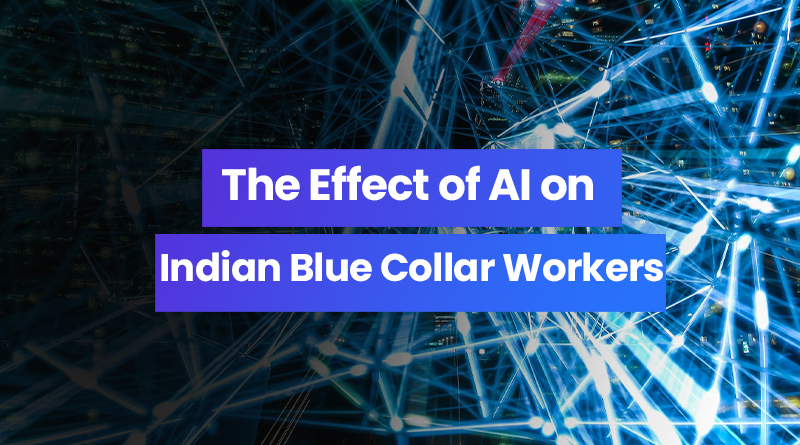 Blue collar jobs are typically thought of as requiring skill, but AI is now making it possible for these jobs to become automated.

As the demand for cheap labor increases, more and more low wage workers will be replaced by AI. While this will not be a path to the robot apocalypse, the replacement of human work with machine work will create its own set of issues.

How AI will Displace the Average Indian Blue Collar Worker

Artificial intelligence will replace the average Indian blue collar worker in the near future.

Automation is taking over human cognition and skillsets gradually, which has led to this displacement of the average Indian blue-collar worker.    The use of AI technology in this industry will help them to focus on their core skills – creativity and emotions, leading to an increase in productivity.

Historically, the average Indian blue collar worker would get a job and stay with them for their entire career. But with artificial intelligence (AI) and automation displacing human labour in various industries, this norm will soon change.

With the increasing shift to AI and automation, blue collar workers can be able to do more labour-intensive tasks like data entry for example. As such, it is not too far-fetched to say that they will get more time on their hands – which can help them transition into other fields that are less suitable for robots.

What Can Indian Blue Collar Workers Do About the Rise of AI?

As the use of AI becomes more prevalent, blue collar workers are feeling more vulnerable.

There is a lot of worry in the Indian workforce because of the rise in the use of AI. There are concerns about what will happen to their jobs in the next 10 years due to this technology. There is hope for those who want to find ways on how they can work with AI and not against it.

The rise of AI has created a major concern for blue collar workers in India. The technology is able to take on many jobs that once were dominated by human workers.

However, there are some ways that blue collar workers can use to deal with the job displacement caused by AI. It is important for them to be prepared and learn new skillsets in order to make their future careers more marketable and secure

Indian blue-collar workers are going to be hit the hardest because of their low education levels. This is a huge problem for India as there is a significant shortage of skilled labor in India.

The solution could lie in the retraining and development of blue collar workers by companies and government agencies. At the same time, they should also look at how they can use these AI machines to make the working process more efficient and productive by automating some tasks that take up a lot of time without sacrificing creativity or human efficiency.

READ: – Nurses during the Covid-19 pandemic

In India, many blue collar workers are reeling under the weight of automation. In the past, India has been a global leader in textile and garment exports, but now it is losing its competitive edge. The government’s solution has been to introduce AI-based solutions to beautify Indian garments and make them more sustainable.

The AI-based solutions introduced by the government have not gone down well with most blue collar workers. They feel that these developments have been alienating them from their jobs and transferring most of the work to automation machines.

Many people argue that such advancements should be embraced because they create opportunities for these blue collar workers to move into other fields such as data science where they can generate higher incomes than what they were used to before.

Automation has been a prominent topic among the chiefs and politics of India and is one of the key factors that has resulted in the recent blue collar unrest. Due to poor wages, high unemployment rates, and lack of affordable housing, many blue collared workers in India are struggling to keep their heads above water.

Automation has enabled many industries to operate more efficiently, but it’s also introduced new challenges, such as how to engage employees who are facing this change. Blue collar workers have been left behind with no clear career paths or social security for their future.

With the rise of AI, it is becoming difficult for blue collar workers to find jobs in the traditional industrial sector. The introduction of AI has disrupted the job market, making it difficult for people to find jobs that are comparable to what they are used to doing.

The impact of this technological change is vast. It not only affects blue collar workers but also their industries and society as a whole. With decreasing numbers, there will be drastic impacts on the economy and society due to this sudden shift in technology

The effects of AI on the future of Indian blue collar work force are not clear yet. However, one thing is clear – it will result in an increased demand for people with skills like knowledge and creativity which is what Indian people are already good at.

The scope of automation and AI-based technologies in India’s workforce is unclear, but its effect on employment opportunities for blue collars would be significant.

AI has the potential to help reduce costs, improve accuracy, and increase efficiency by streamlining tasks. It is also able to learn with experience and adapt to new patterns of content generation.

The impact of Artificial Intelligence on India’s Blue Collar Worker workforce is not just limited to the type of job that is created, but it also has a great impact on the content of the jobs. AI can help create jobs that are highly sought after today and also promote innovation in the workplace.

There is a lot of uncertainty and fear among blue collar workers due to AI and automation. However, this fear does not need to be present as long as we stay ahead in terms of creativity and innovation.

Thanks for reading. To apply for Blue Collar jobs, visit us at Teamlease