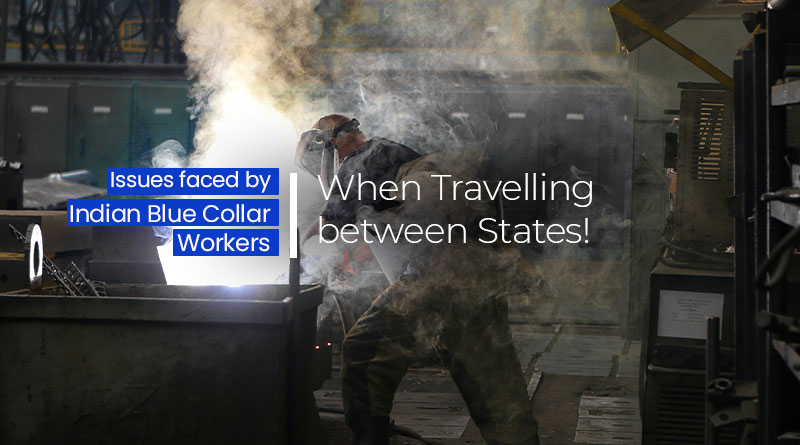 Introduction: Problems faced by Indian travellers going to another state

India’s population is growing at an alarming pace. Blue collar workers are those who have a job in manual labor positions outside of white-collar jobs which involve management, professional, or technical work. These people are often seen as being less fortunate than others due to their lower socioeconomic status and live in poverty conditions with low self-esteem and lack of qualification education. These Indian labourers usually travel across states for work purposes because they do not have the opportunity to stay in one place for too long.

The difficulty of travelling from one state to another in India is a major issue, and it is an even bigger problem for blue collar workers because they don’t have the opportunity to travel.

In India, there are many states and people cannot easily move from one place to another. This is a major inconvenience for blue collar workers who do not have the opportunity to travel due to their work commitments. It becomes difficult for them because they don’t have a way of travelling between states and they can’t go back home on weekends or holidays.

India is one of the most diverse countries in the world with people belonging to different regions and language speaking communities.

Due to this, there are many socio-economic factors that shape India’s population. One such factor is the economic status of its citizen. The Indian government divides its citizens into three broad categories, namely, ‘scheduled castes’ (SC), ‘scheduled tribes’ (ST) and ‘other backward castes’ (OBC).

While SCs and STs are mostly not well-off because of their limited access to opportunities, OBCs are quite prosperous. The percentage of people below poverty line has historically been higher for STs than for SCs.

What are the Challenges Faced by Indian Blue Collar Workers going to another state?

The idea of travelling to another state is exciting for some, but for others it can be a long and difficult journey.

One of the major challenges faced by Indian blue collar workers travelling to another state is finding new jobs after they relocate.

The new job location might not be compatible with their skillset and they may not know anybody at the new place, which makes it difficult for them to get a good paying job.

Another challenge is that these blue collar workers are not accustomed to renting houses or apartments in the big cities, so they get exploited by landlords.

Lastly, adapting to a new culture and lifestyle can be tough for these people who have been living in a small town.

There are challenges faced by Indian blue collar workers travelling to another state like:

– Language issue: If the worker is not fluent in the local language, it may be difficult for them to find work.

– Limited sources of income: The remuneration they get may be only a fraction of what they would have earned back home.

– Lack of transport facilities: It becomes tough for them to commute from one place to another as public transport is scarce and expensive.

How Can These Challenges Be Resolved?

These challenges can be resolved by considering the work culture and environment of the blue collar workers. It is important to understand what these workers want and how they want it, and not only what the company wants.

Workers also need to be considered in terms of time and family life, as this will make them happy and more productive.

Some solutions to these challenges are:

– Encourage cross-state migration as it is an effective way to reduce regional unemployment and achieve balanced development;

– Offer training courses for migrants on the employment law and labour rules at their destination;

In recent years, there has been a trend to move away from a centralized economy to a decentralized one. This has led to an increase in the number of people who relocate for work within India.

The Indian government is looking into these challenges and trying to resolve them. They have made it mandatory for companies to provide accommodation and transit facilities for the blue collar workers travelling from one state to another. One such measure taken by the government is the introduction of e-way bills, which can help with tracking goods as they are transported across state borders.

Conclusion: The Resolve of These Issues Will Have a Huge Impact on India’s Economy and Employment Numbers

In conclusion, India is in a very problematic time when it comes to its workforce. There are many issues that need to be resolved immediately in order to stop the country from going further down. The resolve of these issues will have a huge impact on the economy and the unemployment numbers in India.

The blue collar workers in India will be forced to migrate to other states due to the lack of jobs, which is a problem for not just these workers but also the state they are migrating to.

The conclusion for this section is that the lack of jobs in rural areas in India causes blue-collar workers to relocate to other states. This causes an issue because it forces these people into jobs that they may not be qualified for and it can cause problems with their social life.

The resolution of this issue will have a huge impact on the Indian economy and employment numbers, since there will be more people looking for work in urban areas, which would increase the number of job opportunities available.
Thank you for reading. Visit us at Teamlease for more updates.