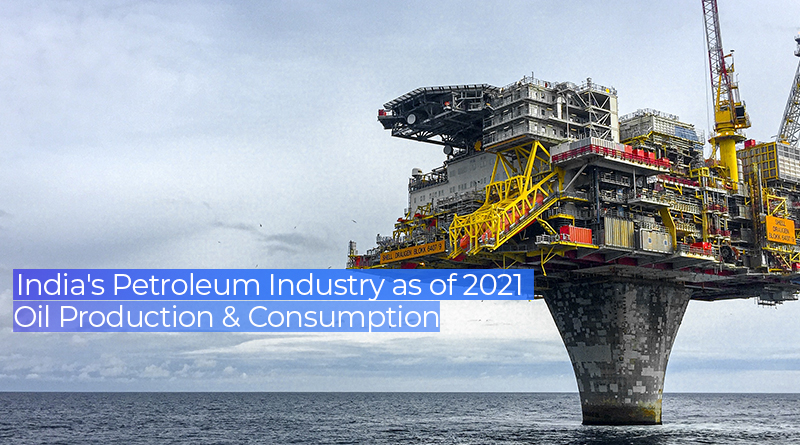 Introduction: India’s Petroleum Industry as of 2021

India’s petroleum industry has been in a state of transition. From being the world’s largest importer of crude oil, it is now one of the world’s leading producers of crude oil. In the future, India will be responsible for almost 10% of global demand for crude oil.

The Indian government has also been working on diversifying its energy mix and this includes efforts to reduce use in fossil fuels and increase use in renewable energy sources such as solar, biogas and wind power. This is a big step towards achieving the target set by India – to cut carbon emissions by 33% by 2030 over 2005 levels.

From being an importer of oil, India will soon be a major producer of it with an expected output growth rate at 7% per annum from 2021-2022

In India, the petroleum sector is considered one of the important sources of energy. The country has a long tradition of oil production and consumption. There are several factors responsible for this, the most significant being the poverty and lack of infrastructure in other sources of energy like coal and natural gas.

The Indian petroleum industry has been on a steady rise since its inception. However, it is heavily dependent on crude oil exports as it has no domestic production capacity to match its consumption needs. The population growth in India also contributes to this as more people mean more demand for energy throughout the country.

What is the Outlook for India’s Petroleum Industry as of 2021?

With increasing demand in India, the outlook for Petroleum is optimistic.

Petroleum industry in India has been growing at a rate of 18%. The Indian government and IOCs are investing heavily on oil and gas exploration to meet growing demand from various sectors such as power, transportation, chemicals and refining.

India’s petroleum industry is experiencing steady growth and will continue to do so in the coming years.

How will India’s Petroleum Industry and its workers be Affected by Climate Change?

India is one of the fastest growing economies in the world, with a robust petrochemical industry and its workers are considered some of the best paid.

However, as climate change continues to affect countries across the globe, India’s petroleum industry is likely to be hit hard.

The industries that are most vulnerable to climate change are those which rely on natural resources like heat and water. The petroleum industry is one such example which may be hit by volatility in global oil prices that lead to supply constraints.

As the global climate changes, the petroleum industry and its workers will have to adapt in order to maintain their operations.

The Indian petroleum industry is expected to increase by 6.2% in 2030 and fall by 8.1% in 2050 as a result of climate change impacts on India’s agricultural sector. As a consequence, there will be several job losses for blue collar workers that are employed in the petroleum industry, with an expected decrease of 27% over the next decade.

Although India does not produce much oil, the petroleum industry provides many jobs to blue collar workers. There is a significant number of blue collar workers who live in and around oil-producing areas throughout India. These workers are working in industries where they are exposed to air pollution and risk their health due to exposure to chemicals used while drilling.

The oil companies try hard to minimize these risks through technological advancements like using cleaner drilling equipment, but there is no real way to fully protect oneself from these risks until more research has been done on this topic.

How will Modernization of India’s Petroleum Sector Impact the Blue-Collar Workers?

India’s petroleum sector is undergoing major changes due to increased demand for fossil fuels and the modernization of its petroleum sector. The result is a significant number of blue-collar workers in the country have lost their jobs.

The levels of unemployment and change in skill requirements have impacted the blue-collar workers in the country, particularly those with lower levels of education. This has led to a drop in productivity and overall economic growth.

This shift could be seen as a disadvantage for India because it will force people to migrate abroad, which will result in less capital flowing into India’s economy. However, there are many benefits associated with this new system that make it easier for workers to transition into other industries once their skills are outdated or irrelevant within their current industry.

The Indian government is actively pushing for the modernization of India’s petroleum sector. In 2017, the government passed amendments to the Indian Petroleum Corporation Act, which allowed private companies to enter into investments in the sector. This has led to a private-sector led petroleum industry and an increase in production capacity.

The modernization of India’s petroleum sector will have many impacts on blue-collar workers who are employed by state-owned companies and semi-government firms. It will lead to a change in employment as State Governments cut back on their employees. The changes also mean that there will be an increase in job opportunities created by this modernization process.

Some blue-collar workers may be retrenched while others may gain employment and experience new opportunities as suppliers, contractors, or by working in field offices.

India’s petroleum sector is at a point where it can no longer rely on the black gold for fuel. India has to modify its energy mix and move towards renewable energy sources to reduce its dependency on oil imports. This modernization will bring new opportunities for the blue-collar workforce.

The Indian government is trying to modernize India’s petroleum sector by improving its efficiency and reducing its dependence on imports. They have started with the upstream sector by building refineries, drilling rigs, and deep-sea exploration activities in order to produce more oil at home.