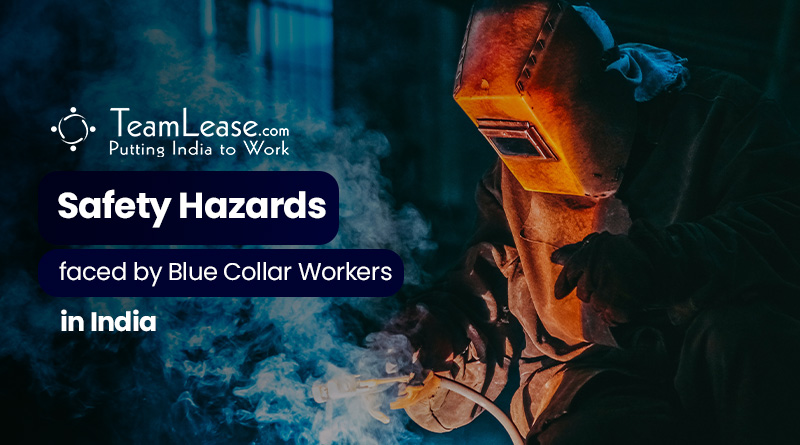 Introduction – What are some common safety hazards of Indian blue collar workers?

The number of accidents in the Indian blue collar sector has been on the rise. The country’s booming economy has led to a surge in jobs, but poor working conditions and lack of awareness have put workers at a huge risk.

A major issue, related to the safety of blue-collar workers in India is the lack of health & safety policies. This lack of safety guidelines leads to many occupational accidents, which are then further exacerbated due to poor workplace conditions.

Workplace injuries can also lead to long-term health problems, so it is important for employers and employees alike to take safety precautions.

One of the most common safety hazards for blue collar workers in India is the use of tools and machinery. Almost 30% of all work-related accidents in India are because of workplace accidents.

Workplace accidents are one of the leading causes for work-related fatalities in India. The most common incident causing accidental injury or death is when an individual grabs a moving object while working with it, which leads to amputation, crushing, or other serious injuries.

You will be surprised to know that there are quite a number of safety hazards that Indian blue collar workers face on the job.

India is one of the most populous countries in the world. It has a population of 1.3 billion people, which is significant for any country. This means that there are a lot of jobs available for Indian workers. However, due to the increasing number of jobs that are available for them, they are also feeling more pressured to find work and complete their tasks quickly because they have bills to pay and mouths to feed.

As a result, they are often faced with workforce violence which includes verbal abuse, physical abuse, sexual harassment or assault on the job. The problem with India’s economy is that it has made an increased number of blue collar workers vulnerable to workplace violence because there are not enough opportunities for them to grow their skillset .

Falling is one of the leading causes of death among working class people. Studies show that falling is responsible for nearly 1/3rd of all accidental deaths among Indian blue-collar workers. This number has been increasing drastically because of increasing population and unsafe working environment.

The Indian economy is booming but the lives of working people have been changing little by little with the advent of technology, globalisation and formalisation. The labour laws have been relaxed for industries such as call centres which have a large number of jobs that are insecure and poorly paid.

The risks involved in doing a job without any safety measures are high and these include falls from height, slips on wet surfaces etc. In order to reduce these risks, companies should take precautionary measures such as having an effective height safety measure, installing anti-slip flooring and providing protective gear for employees who work with hazardous materials or dangerous machinery.

How do we prevent these accidents? This shows us why it is important to invest in safety training. One way is for employers to provide a risk assessment certificate so that their employees can use it as evidence if they ever get into an accident. Another way is for them to require employees to be fully covered by insurance before they start working on site.

Fires and burns face blue collar workers in India is an issue that needs urgent attention. The country has the highest number of such accidents in the world, which means that it has twice as many fire and burn deaths than China, Russia and South Africa.

Fires and burns faced by Indian Blue Collar workers can be very devastating. Most of the blue-collar workers in India work in factories, construction sites, and small businesses. These industries are prone to fires and explosions due to the high use of dangerous materials like polythene and acetone. When these fires happen they result in severe burns for most people caught in them.

Most of the victims don’t survive these incidents because they don’t have access to proper medical facilities and lack funds for treatment.

Chemical exposure is one of the major problems faced by blue collar workers across India. This is mainly due to the lack of knowledge regarding safety precautions and understanding of chemical properties.

There are many companies, particularly small and medium-sized businesses, who do not hire trained professionals to take care of chemical risks. These companies often take extreme measures that put their employees’ lives at risk.

The lack of awareness among blue-collar workers has resulted in many accidents and deaths across India, which has led to mounting pressure on the government for better policies.

Despite the wide spectrum of safety systems and protective measures, there are still blue-collar workers in India who are exposed to various chemicals on a regular basis. This is primarily due to the fact that most of them don’t have access to proper safety training and awareness on how to avoid exposure. This goes back to the idea that they cannot afford the safety equipment and protection measures that they need.

A survey conducted by the International Labour Organization (ILO) found that Indian Blue Collar Workers face a higher risk of accidents with Cutting Tools than their Western counterparts.

There are numerous reasons behind this phenomenon, one of which is that there is no proper training or awareness about the risks involved. Another reason is that workers are constantly struggling for survival and thus work under pressure, leading to unnecessary errors.

The study found that most workers had never received any training on how to use their tools. They also rarely used protective gear like gloves and goggles to prevent injuries.

The study also revealed some interesting findings on how companies can reduce accidents with Cutting Tools by providing better safety standards, training sessions with workers, and more          safety gear for workers to wear during work.

7. Accidents due to Improper Use of Equipment

Accidents due to improper use of equipment faced by Indian Blue Collar Workers are fatal injuries that result in permanent disability or death. These accidents are mostly caused by lack of safety measures or knowledge about risks involved in machines and equipment used.

Indian blue collar workers face high risk of accidents due to improper use of machines, engineering instruments, and other related equipment because they lack the knowledge and safety measures to protect themselves against the risks.

Safety regulations for Blue Collar Workers on the Job  in India

Blue collar workers should always wear an appropriately sized hard hat when working outside of the workplace; The hard hat must be worn snugly on the head with no space between the head and the hard hat for possible impact in case there is a fall or accident. Fire extinguishers must be carried by your

There are no safety regulations for blue collar workers. Blue collar employees are not covered by statutory protection like white-collar workers, independent professionals, and other sectors of the economy.

The risks of working in India’s informal economy are many and varied. They range from physical injuries or death to mental trauma or loss of earnings due to lack of work during strikes or shutdowns.

Every day, the Blue Collar Workers in India face various risks that can be life-threatening. These workers are exposed to a lot of work-related accidents and illnesses due to the long hours they spend at work.

The Government of India has initiated a process of drafting a new set of safety regulations for the Blue Collar Workers on the Job in India to prevent such incidents from happening.

In order to address this issue, it is important for employers as well as employees to take safety precautions at all times.

Why Teamlease.com for Entry-level & Blue-collar jobs?
Getting placed in an entry-level or blue-collar job market in India is very difficult. If you are looking for entry-level jobs or vocational sector jobs, then you’re in the right place. Teamlease.com is a job portal that helps in finding jobs for workers or employees with ease. Register at Teamlease today