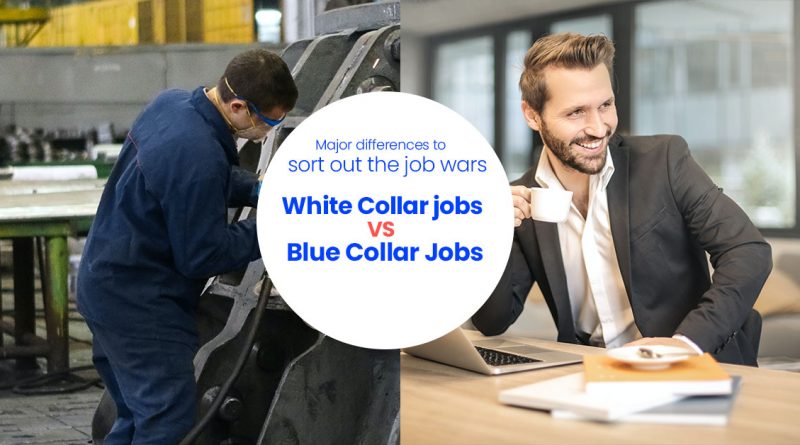 The world is becoming a busy place with people being invested in their work. It is quite common that we see many individuals in front of our very own eyes working hard with blood and sweat. It is quite a shame that we as a living and breathing society cannot understand their importance or do not even try to know what work they are doing.

People do different jobs according to their skills and capabilities but often the ordinary public often confuses them and their job roles. This article is written with the intention of sorting out the differences between blue collar jobs and white-collar jobs.

The following pointers will give you a clear difference between these two industries: –

Every workplace has its own dress code because it is often a mark and an identification of the industry they are representing. Maintaining a certain dress code is necessary and a disciplinary role in nature.

White-collar people mostly are dressed in formal shirts and trousers with additional accessories like suits and ties. Most of their clothing has a sense of grandeur and elegance which is reflected in their work as well. Their clothes are extremely well-ironed and tailored for every occasion.

Blue-collar people have a dress code of blue or orange clothing developed for working in harsh conditions in construction sites or factories. It is designed specifically for enduring rough situations often seen in dense industrial complexes. Their dress is often patched with dirt, oil and grease while working with machineries, oil, metal wood or other materials. Most of the time it does not require any cleaning.

Every sector requires a certain form of education from their employees because the period of time which they have invested in that education will be required in the professional sector as well.

White-collar workers often have bachelors’ degrees from government colleges or private colleges and work in government institutions or multinational companies. For specialized roles, a master degree like the MBA (Master of Business Administration) is required to fill in roles for marketing, human resource planning, finance, operations, logistics and others.

Blue-collar workers fall under the semi-skilled or unskilled category of workers where education is more or less necessary. A majority of blue-collar jobs does not require any undergraduate degree or postgraduate degree but when it comes to specialized sector like engineering, electricity or medical, a Diploma is a compulsory requirement because these are high-risk jobs and without training, the person who is given the job is at the risk of putting other people lives into danger. Day by day, the blue-collar job sector is also demanding educational qualifications to meet its challenges.

How are they often viewed by people?

Blue-collar people are viewed as workers working in a factory or a construction site and they are not working on a permanent basis for anyone. Rather, they have the certain level of freedom of changing jobs immediately whereas their white-collar counterparts have to work for an organization on a contractual basis and once the contract is over, they have to be looking for other jobs.

White-collar people are often in offices from both the government sectors and private sectors which are usually well-lit and air-conditioned to suit their work. They are working in a comfortable zone where they do not have to face the harsh situations of weather, crowdedness or noise. It is much more silent and ambient in nature where disturbance is really low.

Blue-collar people, on the other hand, work in construction sites, factories, sewage clearing, carpentry, chemical plants or dockyards where there are high levels of noise pollution where working is extremely difficult and most of the time, the workers are covered in sweat which causes extreme level of discomfort and fatigue. They have to endure the harshness of weather and they have to live under high-levels of risk which is often imposed by working with heavy machinery or cutting tools or electrical tools which has the potential of not only causing major accidents but also can cause fatal cases of death and destruction.

Money is important for survival in today’s world and it is very much applied in any sector.

Blue-collar people are paid as wages by the hiring organization. And mostly the payment of wages is more or less systematic, because these workers do not hold any permanent position like their white-collar counterparts and are constantly changing jobs for better payment.

White-collar people are paid salaries and it is recorded in databases by the human resource admin. They hold permanent positions in various government institutions and private companies and they change their jobs very rarely and even if they change it would be after 5 years.

White-collar people are paid salaries on a monthly basis based on their performance evaluation by their reporting manager through a series of reviews and checking the work on a step-by-step procedure so that no mistake arises when the final review is submitted to the Vice President of Human Resources. Mostly salary is credited in the employee’s bank account with a receipt.

Blue-collar people are often paid on a daily basis, weekly basis or hourly basis. It is often paid by the owner in hand and many times without a receipt. The act of giving no receipt of payment is highly unethical because the blue-collar people are unable to prove any evidence of employment. It is an alarming thing and some necessary things are to be taken to avoid these kinds of issues.