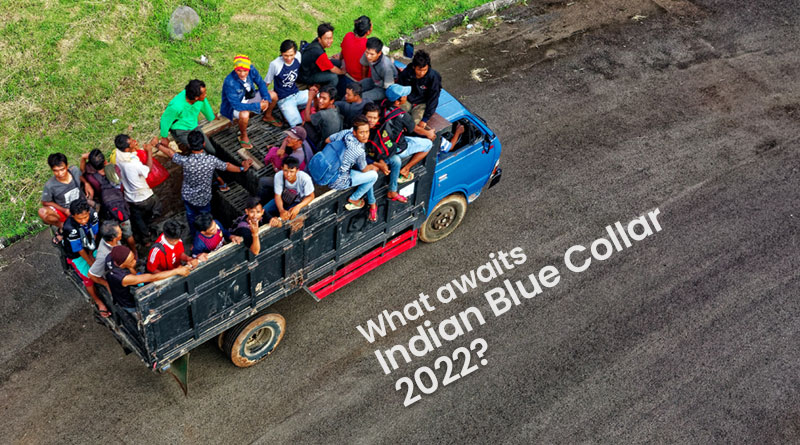 The rapid economic development and technological advancement in the country are
making it difficult for blue collar workers to keep up with the pace of change. The
biggest change that Indian Blue Collar Workers will experience is a massive shift in
their definition of how they work.
The Indian economy is known to be an informal one and this has been the case since its
inception.
The Indian blue collar worker plays a pivotal role in the economy because they make up
the largest workforce in India. The livelihood of these people depends on industries
that are prevalent in India like construction, manufacturing, IT, etc. With the changing
times, there has been a shift in labor to a more educated workforce which has led to an
increase in low-skill jobs and blue collar jobs being created for relatively unskilled
workers. This is not good news for the millions of blue collar workers who will soon
find themselves out of work.

What the Future of Work Looks Like for Indian Blue Coller Workers?
Indian blue collar workers may face a tough time in the future. There are a lot of new
technologies and global markets that are not yet ready for them. However, some
companies have started taking steps towards finding the best ways to work with them.
Currently, there is no single way to identify Indian blue collar workers because they
come in all shapes and sizes. Many people see this as an issue that needs to be
addressed urgently because it could impact the future of work in India if not dealt with
properly.
A report also found that 69% of jobs by 2027 will require some form of non-routine
cognitive skills, which can only be delivered by those with higher education. The report
also states that countries with high average education levels would have to work
harder to meet the demand for labor with increased skill sets.

While this poses a challenge for blue collar workers, it also promises an opportunity for
them as they can get a chance as part of the workforce that is expected to grow
significantly in the coming years.
Blue collar workers are often forgotten by the government and the media. However,
with the increasing advancements of technology, it is only a matter of time before we
start seeing a change in how blue collar workers are viewed.
The 4 Skills That a Successful Blue Collar Worker Should Possess
Blue collar workers usually have a few key skills that they need in order to make them
successful. These include adaptability, communication skills, multitasking skills, and
resilience.
Adaptability: This is the skill that blue collar workers need most. They need to be able
to handle changes quickly and not get too upset about it.
Communication: Blue collar workers also have to be able to communicate well with
their coworkers, bosses and customers in order for them to be successful in their jobs.
Multitasking: This skill is crucial for blue collar workers because they have a lot of
different tasks at once that they have to complete all day long.
Resilience: This is another important trait that blue collar workers need because of the
nature of the job itself – it’s unpredictable and there’s
Blue collar workers are seen as the backbone of our economy. They are hardworking,
reliable, and generate a lot of revenue for their employers. However, there is a shortage
of available blue collar workers in the labor market. Nowadays, employers want to
recruit employees with skills such as adaptability and communication to fill up the
demand for white collar jobs.
The skills that blue collar workers need for career success include adaptability in the
workplace, communication with team members and customers, multitasking at work
and resilience to handle difficult job demands.
Think of the blue-collar worker as a jack of all trades. They are capable of providing
support in a variety of different departments, meaning they have transferable skillsets
and can move around within the organization.
They have the ability to work well with other blue-collar workers, which is important in
a job that requires teamwork. They also have an understanding of how to conduct
themselves so that they are not seen as unprofessional or disrespectful. They know
how to communicate effectively and should be able to establish relationships with
people from different demographics and backgrounds.

How Indian Workers Can Adapt and Find New Jobs After
Robotization?
The Indian economy has been largely developing in the IT industry and is at a point
where the country might face mass unemployment. With robotization, India will have to
do a lot of research and development on labor-intensive sectors.
The current job market in India is largely based around tech-based jobs. If AI can take
over these jobs, then it will create a lot of unemployment among the workers who are
not skilled enough to compete with new technology.
With AI assisting human workers, they can be more productive and spend more time
analyzing and developing new technologies such as artificial intelligence.
It is important for workers to learn how to adapt to new technologies in order to have a
more secure future.
The jobs that are most at risk of robotization are those requiring repetitive tasks, such
as manufacturing and clerical work. However, some tasks that were once considered
highly “skilled” will likely be automated as well, including drivers and teachers.
Workers need to be able to learn new skills or find new jobs after being displaced by
robots in order for them to have a future.